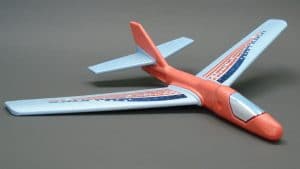 Where to start? That’s a dilemma for many inventors. Even those who have been down that road before. Many times people with a great idea turn to Polyfoam, not just to manufacture a product but to design and engineer it as well. That occurred when a national toymaker contacted Polyfoam about developing flying airplanes and rockets for its line of toys. Excited about aerodynamics engineering, the team went to work on the ultimate flyer.

With the idea for an airplane in hand, Polyfoam put its multi-disciplined engineering team to work on the aerodynamic design. The goal was twofold: create a foam airplane that looks great and really soars, and make it affordable to keep costs down for consumers. Polyfoam’s warehouse soon became a makeshift airfield with prototype after prototype being launched and perfected for its flying capabilities. After a series of design changes, the team had developed a line of foam planes that flew like a dream.

The team then worked with their customer to help on the packaging front. Included with the foam parts were stickers and instruction sheets, all packaged in an attractive sleeve to be displayed and sold at retail. Polyfoam immediately became an extension of the toymaker’s group by doing all the packaging and display pack-outs as well. This further helped to keep costs down and both goals of the perfect flying toy airplane and affordable consumer pricing were successfully met.

With the fantastic outcome of the airplanes, the team then developed a foam rocket propelled by a band stretched between the rocket and a handle designed and molded in Polyfoam’s injection-molding facility. After repeated flight tests and design revisions, the rocket successfully passed all tests for flight and fun, at an attractive cost to consumers. Yet another successful product launch.

To see how the airplanes work check out this video:

Polyfoam LLC is now part of the ALTOR SOLUTIONS Family!
Visit altorsolutions.com to learn more about the group and our expanded capabilities.